Home/Events, Press-centre, SDG/Realizing the potential of BRICS youth cooperation is the key to sustainable future
Previous Next

On December 14, a three-day BRICS Youth Forum on Sustainable Development Goals was launched in a hybrid format. The Forum is being held for the first time and is a key international youth event aimed at promoting and implementing the UN Sustainable Development Goals. The Forum is organized by the Ministry of Science and Higher Education of the Russian Federation, the BRICS Youth Energy Agency, the National Youth Council of Russia, and RTU MIREA.

The main goal of the Forum is to promote the participation of young people in generating effective and innovative ideas that can help achieve the Sustainable Development Goals by 2030. The issue of promoting the UN SDGs is one of the most relevant in the current unprecedented period, when the world is on the verge of significant transformations.

Young generation faces the challenge of shaping the sustainable economic and social future of their countries. Today, BRICS unites the largest youth community in the world, so in the near future it will be these young people who will make the most important decisions of cooperation between countries in the implementation of ideas to achieve the SDGs.

The main topic of the first day of the Forum was “Youth of the developing world as a driver of achieving the UN Sustainable Development Goals in the new decade”. As part of the program of the first day, two plenary sessions were held: Opening session of the BRICS Youth SDG Forum “Unlocking the Potential of Youth and Forging Closer BRICS Youth Cooperation to Ensure Accelerated Action for Sustainable Development” and “BRICS Youth: Shaping a Sustainable Future Together”.

The participants were welcomed by Mr Alexander Vedekhin, Deputy Director of the State Youth Policy Department of the Ministry of Science and Higher Education of the Russian Federation, and Mr Alexander Kormishin, Chairman of the BRICS Youth Energy Agency. 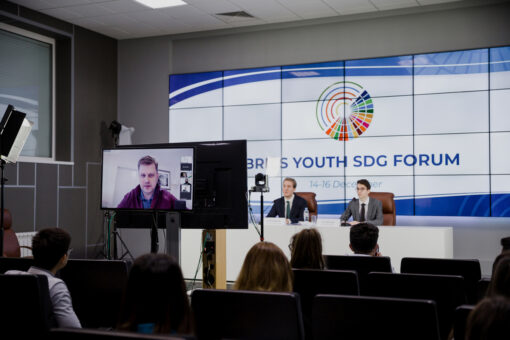 Among the honorable guests of the event who made a welcome speech and addressed the participants of the Forum, was United Nations Secretary-General’s Envoy on Youth Ms. Jayathma Wickramanayake, Director of the UN Information Center in Moscow Mr. Vladimir Kuznetsov, Secretary-General of the United Nations Association of Russia Mr. Alexey Borisov, Managing Director of the National Committee on BRICS Research, Scientific Supervisor of the BRICS Russia Expert Council Ms. Victoria Panova.

The plenary session “BRICS Youth: Building a Sustainable Future Together” served as a platform for the exchange of experience among representatives of youth associations on the implementation of projects in the field of sustainable development, as well as successful practices of involving young people in achieving the SDGs at the national, regional and international levels. In addition, the participants discussed the prospects for BRICS youth cooperation in order to shape a sustainable future and introduced specific initiatives to develop cooperation.

During their presentations, the speakers touched upon such topics as the financing of research in the field of SDGs, the need to integrate social issues into all spheres of life, the involvement of the local community, the urgency to shift the focus and discuss SDGs at the school stage, the need to exchange ideas within the framework of the first-of-its-kind SDGs depository in BRICS countries and other initiatives.